Miura Bull is a freelance pilot who currently resides and operates exclusively in low-security space. He lists his profession as oil trader and he is the head of a one man corporation, 7 Tribes Gun Oil Company. 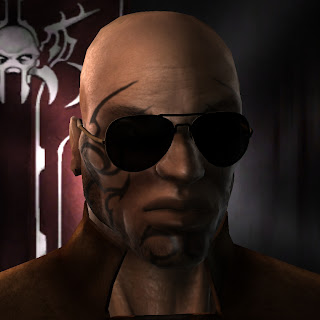 Here is his story.

There is one thing in this universe that really tickles me and that is oil. My pre-capsuleer days had me working in the heavy machinery factories planet-side in Molden Heath. Here we would work very long shifts, we'd spend our days assisting the robotics teams, it was tough and dirty work and only the strongest men made a good wage.

I'd never seen drilling platforms like this before, huge structures, really mind boggling. The platforms would eventually be shipped to various locations across New Eden for operations in null-security space. Most of the gear went out to the Outer Ring region for excavation and some went closer to home like to the Great Wildlands region or Curse or even Scalding Pass. I longed for adventure and these far off corners of space were just a dream to me.

During my time off from the factories, which I must admit were few and far between, I'd spend some of my wages I had saved up on tourist tickets to some of the shadier parts of New Eden. Drug dens, brothels, pirate safe havens, you name it and I've been there. One too many glugs of the infamous Thukker Fire Whiskey and it was easy to forget yourself in some downbeat and dirty drug riddled outpost, a few days of euphoria in the pleasure hubs could really take your mind off of work.

The grind was endless, I'd work twenty-one days solid, with little rest and then I'd spend four or five days away having the time of my life. Whiskey, women, guns, punch ups, narcotics . . . .
I had everything I needed during my time off from work but then one day after a heavy binge of Nerve Sticks and Crash (not a good mix, try it) I woke up in an Angel Cartel bar some two days after I was meant to report back for work. I had messed up big time, my flight home was long gone and I had a monster of a headache and no way out of what was, when sober, one hell of a scary place. To make matters worse my intercom was flashing up six messages which started with a polite asking of my current whereabouts to a simple - you're fired!

It took me a few days to get myself sorted after the comedown and I eventually hitched my way back to safety courtesy of a small salvage team who were returning to Ammold after a three month scrap metal tour. I was relieved and decided to go straight from then on.

Now back in Ammold I decided to sign up for a Capsuleer Program at the Republic Military School and it was here that I learnt to master the Rifter hull and the art of combat that went with it. My days would be spent learning barrel rolls and getting myself accustomed to the chatter and clanking of my autocannons, the only downside was I spent most of my days shooting at huge old and rusty floating warehouse containers that no matter how much I threw at them would never fight back. I longed for more, now I was a capsuleer I thought about the adventure and the hundreds of solar systems and outposts that I could visit. One morning I handed in my notice and boarded a shuttle to Rens.

Here in Rens I formed a corporation called the Black Rebel Rifter Club, we were more like a gang of frigate freaks who just enjoyed going out and having a blast in the Rifter, it was fun and we had at one time about seven capsuleers on the roster. Sadly, after a short period of inactivity on my part most of my mates left the gang for pastures new and I went back into the oil trading business with my new company. I haven't looked back since.

Don't let yourself be fooled into thinking that I'm now some mad industrialist, far from it. Oil is the lifeblood of New Eden, without my gun oil deliveries autocannons would break and firearms would jam. I'm obviously not delivering quantities on a grand scale like some of the mega corporations out there but even the small guy plays his part in the ever moving cog of New Eden.

Now the fun part. My deliveries take me into the darkest areas of space, lawless lands and lands frequented by the nastier bohemians of New Eden, I need to stay alert at all times and be strong of mind. My Rifter's are always fit for combat and quick escape, should the need arise. Sometimes I might be in a pocket of space that hasn't seen a wayfarer for days and then sometimes I'll be in the busiest faction warfare zones or pirate havens.

At the moment life is good, business is booming, my autocannons smoke on a regular basis and my drug and drink fuelled binges are now, shall we say, less frightening than they were.

Thanks for reading.
Miura Bull.


Want to share your background so far in New Eden? Have an interesting story to tell? Have a cool story or an idea you want me to work on? Send all correspondence to khanidoxi@hotmail.com
Posted by Oxidizing Agent at 11:33