The Rumble of War and Bitterfly

The long term security of the Amarr Empire and its devout followers was the topic of discussion as I sat in conversation with Bitterfly in an Amarr outpost over in Roushzar.


"I will happily scoop every single corpse of the Gallente and Minmatar and then cut off every single ones head and keep it as a trophy." She barked.

Bitterfly was animated, she was eager to get started in this war, she sure as hell hated the Minmatar people but at the same time respected their technology and weapon systems, throughout her time in New Eden she had learned to master almost every single gunnery skill to a maximum level, including laser and projectile specialization skills. To me she was the perfect HAC pilot and I was extremely glad to have her on board.

Her icy stare scared me. 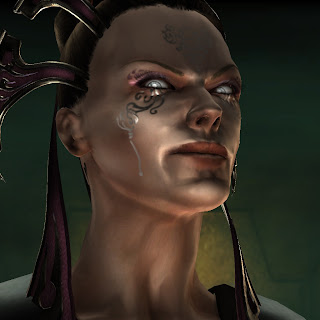 "Oxi, when are you going to get out of those damned Punishers and into something with more resists?" She grunted.

I shrugged back at her, desperately running some numbers through my head.

"A couple weeks, maybe?" Was my response.

"Well hurry because I think we'll make a good team if you can get into an Assault Frigate sometime soon."

This time tomorrow we would be officially fighting for the Amarr Empire. It was exciting to think of what was on the horizon. Inside my artificially created body my heart pumped, my thoughts drifting to the people of my homelands that I was about to serve, to protect.

"Sorry." I whimpered back.

"Come on lets go take the Vagabond for a spin."

And off we went into the blackness of space, the last hours before the Rumble of War.